Jane Larimer is President and CEO of Nacha, which governs the modern ACH Network, the payment system driving nearly 27 billion safe, fast payments annually. Jane has led Nacha since July 2019, guiding the association as it builds consensus to advance innovation in the payments industry. She was named one of the Most Influential Women in Payments in 2021 by PaymentsSource, which cited the “key payments milestones” she has helped Nacha achieve and her work to advance the ACH Network, among other factors.

An Ohio native raised in Florida, Jane joined Nacha as its first in-house counsel in 1996 and has also served as the association’s chief operating officer and executive vice president of ACH Network Administration.

Jane holds a law degree from the University of Florida – Fredric G. Levin College of Law. Prior to Nacha, Jane practiced law in Atlanta at a firm now known as Bryan Cave LLP, and earlier worked at Nations Bank, now Bank of America. 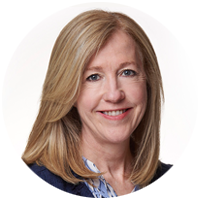