Before joining SCB, Lenny spent eight years at Deutsche Bank and time at Credit Suisse on the New York FX sales desks. He began his finance career in Chicago at JPMorgan Chase, has an MBA from the University of Chicago Booth School of Business, and a B.A. in Finance from Morehouse College. As one of the founding members of the Origins, Nationalities, and Ethnicities (ONE) ERG, Lenny helped to launch the Black Leadership & Development ("BoLD") Initiative, which focuses on engaging and empowering Black and African American colleagues. On top of his work with the ERGS, Lenny sits on the Americas D&I Council, where he is responsible for Nationality & Ethnicity Engagement. Here he partners with other diversity, inclusion, mentoring, training, and retention efforts at the Bank and beyond. Lenny is also a leader in the community. He serves on the New York Advisory Board of America Needs You and serves in an advisory capacity to other small businesses and non-profits. He has also been on national television twice; HGTV and Oprah. In his spare time, Lenny enjoys traveling with his wife and two children, golf, all things Chicago (except the Cubs!), and is a part-owner of a CrossFit gym in Brooklyn (one of the largest black-owned gyms in the state of N.Y.).

Love the African proverb: “Until the Lion learns how to write; every story will glorify the hunter”. 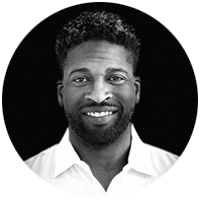